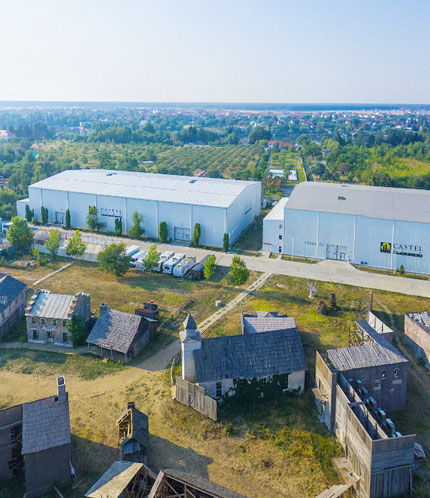 Hollywood of the south: Atlanta’s film industry is building its own mini-city

Welcome to WordPress. This is your first post. Edit or delete it, then start writing!

Pinewood Atlanta Studios is the largest purpose-built studio outside Hollywood – with a new neighborhood under construction to house the thousands of people who work there.

Wynn Everett is an Atlanta native, but left after college to pursue her career in New York City and then Los Angeles. “Those were the only two places you could go if you wanted a life in the arts,” she says.

Two decades later, the 39-year-old actor has unexpectedly found work back in Atlanta – and not just work.

Everett and her two children are one of the 50 families who have become the first permanent residents of Pinewood Forest, a strange hybrid of artist’s commune, luxury suburb and company town, built directly across the street from Pinewood Studios.

The project is the brainchild of Dan Cathy, co-owner of Pinewood Atlanta Studios. A few dozen homes are complete, but within 10 years the plan calls for 1,300 residences, along with a movie theater, a fitness center, pocket parks – and an entire town center.

And the main local employer will be right across the street.

“We just fell in love with this concept, this opportunity to pioneer Pinewood Forest, whose DNA was driven by community and creativity,” says Everett, whose family relocated here in July from Los Angeles. “We wanted a slower pace of life.”

In the past decade, since Georgia lawmakers passed some of the most generous tax credits on film in the nation, the state has become known as the Hollywood of the south. In the year ending 30 June, 455 film and television productions wrapped in Georgia, together representing an estimated $9.5bn in economic impact.

Much of this was centred on Pinewood Atlanta Studios, the largest purpose-built studio outside Hollywood and the American outpost of the UK’s legendary Pinewood Studios, creative launchpad for films including the James Bond and Star Wars franchises.Since it opened in 2013, the Atlanta studio has hosted some of Hollywood’s biggest productions: Ant-Man, Avengers: Infinity War, Spider-Man: Homecoming. Filming wrapped in early October on Avengers 4.

Budgets for such “tentpole” films can easily top $300m, with principal photography taking months. Thousands of people – from caterers to constructions workers to extras – come to work at Pinewood Atlanta every day. Many commute for an hour or more. The stars, too, make the same journey, often staying in central Atlanta at a luxury hotel such as the St Regis or a swanky rental house in Inman Park or Morningside.

“We had thousands of people coming to film across the street, but they had very few places to live and definitely very few places to go eat,” says Bill Lynch, the project director of Pinewood Forest – effectively the mini-city that Georgia’s film industry built.

The idea, says Lynch, was to bring the best of the city to the country, while still maintaining the rural charm of the 234 acres of rolling hills on which it is located. The town borders an old-growth forest; heating and air conditioning are powered silently by geothermal, and a three-mile walking trail encircles the entire community. The houses range in price from $300,000 to more than $2m, and are inspired by European architecture movements from Nordic to Arts and Crafts.

Everett and her family count as their neighbors a jewelry maker, a creative director, and a furniture designer. This demographic – the much coveted “creative class” – is what Pinewood Forest is now targeting. “We want to be for the creative and film class what Nashville is to country music,” says Lynch.

Of course, Nashville is its own city; Pinewood is 30 miles south of downtown Atlanta. The marketing strategy is therefore to sell it as the opposite of stifling cul-de-sacs and soulless McMansions – half the houses will front onto parks, and restaurant and retail chains won’t be allowed. Developers are wooing chefs with the pitch that even though they’ll be cooking outside Atlanta, they’ll be serving food to an international (and occasionally famous) clientele. In the coming years, two hotels will be added, giving stars another option to stick around after a long day of shooting across the street.

The studio itself, meanwhile, hopes the new company town will give it an extra edge in the competitive Atlanta media industry. Despite its 360,000 sq ft of studio space, Pinewood is by no means the only option for filmmakers: south Atlanta’s EUE/Screen Gems, where interiors of the Netflix series Stranger Things are shot, features 250,000 sq ft over 10 soundstages.

Two miles to the west, Tyler Perry Studios, where some of Black Panther was filmed, is still being built. All told, film-makers can find more than 2.3m sq ft of soundstage in Georgia. Despite being the largest studio complex in the US outside of Hollywood, Pinewood needs to invest in order to keep landing the really big fish.

“Pinewood changed the type of project that we could go after,” says Lee Thomas, deputy commissioner of the Georgia Film, Music and Digital Entertainment Office. “We tried to get the first Hunger Games but couldn’t because we didn’t have a stage big enough.” Instead it was filmed in North Carolina. But the combination of tax incentives and the opening of Pinewood Atlanta in early 2014 ensured that all three sequels were shot in Georgia.

The crucial tax credits are unlikely to be withdrawn any time soon: both candidates campaigning to be Georgia’s next governor support them. And though other states have followed up with their own tax credit packages, Georgia has the workforce: the Georgia Film Academy, launched in 2011 and now headquartered at Pinewood Atlanta Studios, has trained thousands of industry workers.

Now it also has Pinewood Forest. As its developers see it, the bigger the industry, the larger the pool from which to draw potential buyers. When Everett was leaving LA and saying goodbye to her friends in the entertainment industry, they didn’t seem too wistful, telling her: “We’ll probably be joining you in a few months.”