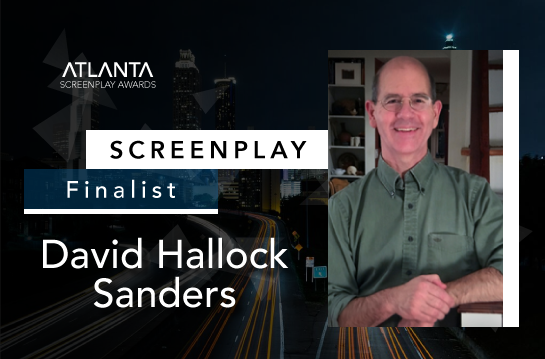 My name is David Hallock Sanders. I was born in Pasadena, California, and after living in Kenya, San Francisco, Boston, and elsewhere, I have settled here in my current home of Philadelphia. Hobbies? Hmmm… I guess craft work (fabric and ceramics), cooking (esp. seafood and desserts), gardening, juggling, and long walks (including a walk across Scotland a few years back).

My screenplay, “The New Moon in the Old Moon’s Arms,” is based on a short story I wrote with the same title. The core concept – that of an exhausted man struggling to care for his Alzheimer’s-affected father – was to a large degree inspired by own experience caring for my father over a decade-long decline, however it is not my own story. The short-story version took well over a year to draft and go through its various revisions, and figuring out how to adapt and polish it as a screenplay took almost as long.

If I’m adapting one of my existing works of fiction, the process first involves a lot of charting and story-boarding and list-making to break the story down into its beats and to focus on the character’s movement through time and space and conflict and experience and growth. Then I need to figure out how to convey, through only action and dialog, all of the characters’ internal processes that in fiction I can describe, but in screenwriting I can’t. Then I proceed, working in some poorly thought-out mish-mash of Final Draft, Scrivener, and Word, to draft each scene, not necessarily in order. Eventually I combine the scene drafts, which are typically notated with lots of questions and abusive exhortations to myself, into one document. That gives me a rough first draft, which typically goes through multiple revisions, usually including a major one after sharing the draft with my writers’ group members, who are always blessedly blunt about what’s not working. Once I have a respectable draft, I send the screenplay to competitions, and that leads to more revisions as I get feedback from judges. For my non-adapted screenplays, I follow essentially the same process, only there is a lot more time and effort up front figuring out the story, characters, beats, etc., which I do on stacks of paper and notecards and on poster boards tacked around my office. Nothing in my process is particularly pretty, and it takes a LONG time, but when someplace like the Atlanta Screenplay Awards finally says, “Good job!” it can all feel worth it.

When I was much younger I took some screenwriting courses and dove into attempting to write some sci fi and monster scripts. They were so horribly bad that I decided I just didn’t have it in me. Then in the early 2000s I was writing a novel, titled Busara Road, and having all kinds of plotting problems, so I tried to conceive it as a screenplay instead. That screenplay was not successful at all, but it taught me a lot about how to structure the novel, which I went back to and finished, and the novel eventually got published and won some awards. At the moment my screenwriting focus is on drafting dramatic shorts instead of feature scripts, which, although I wouldn’t say is easier, does have the advantage of a shorter turn-around time from idea to draft.

It depends on what genre I’m working in at the moment. For instance, I’ve recently started trying to plot an off-kilter social-commentary “monster” movie, and I am finding del Toro and his script for Mimic to be very inspiring and instructive. I’ve also been struggling for some while with a quirky Quaker family Christmas romance, and I have been reading things like While You Were Sleeping and The Royal Tanenbaums. I also recently drafted a sci-fi space disaster drama that takes place almost entirely as radio or intercom conversations among an interstellar space barge’s captain, his first mate, and a sentient computer. It’s woefully unsuccessful so far, but both 2001 A Space Odyssey and My Dinner With Andre are two of the leading influences there, and I want to re-read Steven Knight’s brilliant script for Locke, which is masterful in how much it conveys through confined conversations. I’m also in awe of Jordan Peele and his wide-ranging imagination, as well as his ability to make such different movies that match the specific stories he wants to explore, so I am constantly in anticipation of what he does next.

Oddly, I would say it is Danny Kaye’s movie musical, “The Court Jester.” Since I was a small child I’ve watched it whenever I can, laughed at its silly slapstick, listened over and over to the album, sung its songs and repeated its comic patter, and even though it was made in the fifties, I admire how surprisingly well it has held up as a light piece of comic brilliance and a respectful profile of a sensitive and very non-macho leading man.

Although it may seem overly familiar now, Chaplin’s Modern Times must have been so eye-opening at its release, and it must have touched such a nerve in its brilliant and darkly funny critique of the dehumanizing effect of modernization. To entertain and agitate at the same time – what medium does that better than film?

Dang, that’s a tough question. I guess though, as a Philadelphian, I’ll go with the obvious, but deserving, choice of a local icon: Rocky Balboa.

Another tough question! I guess maybe Mark Twain, although I’d be nervous as hell just talking to him. At the risk of raising his ire by asking the question most writers hate to be asked, I’d be curious to hear him talk about his process for moving from an idea and inspiration to a finished manuscript, including how, and from whom, he got feedback along the way.