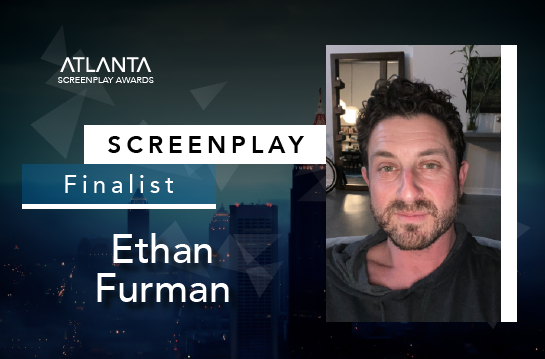 My name is Ethan Furman, was born in San Francisco, and my “hobby” is writing 🙂

The idea literally came to me in a dream, which had never happened to me before. I woke up and had most of the movie in my head. So in this particular instance, it didn’t take me long at all to develop it. But that’s not usually how it goes.

Once I have an idea I’m excited about, plug the story into the Blake Snyder “Save The Cat” beat sheet. Once I have all the beats filled in, break down the individual scenes need to write, and just start writing. If can write. scene a day, no matter how long or short it is, can power through a first draft pretty efficiently.

I was interning for my uncle’s production company in college. My job was to read script submissions all day and write coverage. 90% of the scripts were not good. I thought, “Man, all these writers have agents and managers? I can do this.” I wrote my first screenplay that summer.

My favorite screenwriters might be guys like Charlie Kaufman or Wes Anderson, brilliant artists, but whom probably borrow almost nothing from. If borrow I try to borrow familiar tropes and do something unique with them- blending genres like a horror element in a comedy, or a kids heist movie.

Sure, I’ve been obsessed with lots of stuff. Who hasn’t? went through a phase where my best friend and would put on REQUIEM FOR A DREAM and get drunk just about once a week. Dark times.

It might be the duet of Mickey and Mallory Knox from my favorite movie, Natural Born Killers. They’re just such perfectly darkly comedic anti-heroes. I had never seen characters (or a movie) like that before. So wildly entertaining.

Honestly I would probably ask Abraham Lincoln “Hey man, why are you going to all this trouble? Just let them secede!”