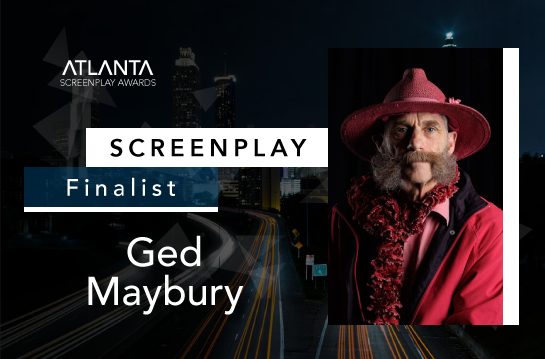 I am now known by my stage-name, Ged Maybury (surname by marriage). Born Christchurch, New Zealand and my childhood in Dunedin (‘a suburb of Antarctica’). Born a child-prodigy in graphic art but falsely assessed at 5 as intellectually impaired. – Cue an interesting journey through the education system to being a School-Dux in 1971. (I was in fact autistic: Asperger’s Syndrome.)

The first ideas for “Goodbye, Ted” began some 20 years ago, originally as a movie treatment: “Ashes to Ashes”. Too daunting; so I deliberately narrowed it down to an achievable 10min Short. It all swung on the idea of being left with someone’s ashes … someone nasty! How might his survivor(s) ‘honor’ him after his convenient demise?

No. I know nothing of ‘formulas’ or ‘beats’. My brain just can’t do it. I’ve written some 30 books now, and they’re almost entirely instinctual. My screenplays advance in the same way; a lot like those ‘Age of Empires’ foggy-landscape games. My creative instinct “hunts” for the best path forwards, it tests each one, writes a chapter, pulls the characters forwards .. until it’s lost. I backtrack and try other bearings. And I usually find the prize: An Ending! (Or don’t. Some books never get finished.)

No such realization occurred. I still do not think in that way. It was the same in my career as a children’s writer. I had two hugely-successful books out in print before the thought finally arrived in my brain: “Hey: maybe I could do this as a career!”

I don’t have any. I haven’t studied them. If I had to pick, I’d say it’s that “Incredibles” guy: Brad Bird. An impeccable-shaped story where nearly every scene is doing eight different things simultaneously! Genius!!

“Millennium Actress” by Satoshi Kon. It constantly folds Reality and Time back over itself, over and over and over again until my brain is so bamboozled that it stops trying to analysis and begins to emote. I always cry.

The arrival of ‘Catbus’ (“My Neighbor Totoro”)! I was in a cinema with one other person, I knew nothing about the movie, I was following the subtitles, fully engaged, and this GLORIOUS whacky fantasy-creature just suddenly gallops into the scene. Blew my mind! I was delirious with joy!

Chihiro/Sen in “Spirited Away”. An ordinary kid dropped into a magical world who reacts as anyone would for starters: terrified, helpless, grief-stricken … But increment by increment she finds the courage to set off on a bizarre and perplexing mission .. Still real, still emotionally trammelled, yet she somehow navigates the entire journey, finds her own inner resources, innovates, makes friends and gains allies – entirely due to her authenticity! And triumphs – not in saving the world, just restoring her parents, to the delight of every Being in that spirit-world. Sen: as tough-assed as they come!

Neil Armstrong. I’d say: “Tell me that terrible joke about being on the moon.”