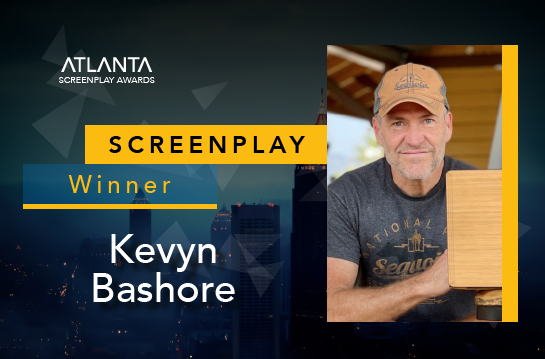 Hobby: Running on mountains. At least that was my leisure time activity prior to moving from L.A. to Fayetteville in December 2021. My current hobby is searching for mountains to run on.

Where did you come up with the concept that just won the screenplay contest?

How long did it take you to develop it into the screenplay it is now? I came up with the concept for my short screenplay THE CLEANSING while I was in a weekly studio meeting with actors, writers, and directors in L.A.. We would workshop scenes, dissect them, then discuss and rework them. During this time I chose two actors who I respected to write a scene specifically for them, to challenge and utilize their strengths.

At the time, I was inspired by current events to choose the theme for the script: what is the definition of life and who has the right to determine it? I decided to project that question several years into our near future to see where we could land as a culture within a few short steps. I workshopped the script with the actors and we were able to see what worked and what didn’t work.

My goal was to write a short, lean script with few words and layered with powerful images.

Expanding on what I wrote in my prior answer:

For this particular script I chose two actors to write for.

I then picked a dramatic theme and subject to write for the script.

As I wrote drafts, I eventually workshopped the script with the two actors in front of

I also submitted this script for critiques and feedback.

I continued to refine the script as I witnessed first-hand what effect it has on the readers and viewers of the live-acted scenes, both with professionals and non- professionals alike.

I’ve been writing since I was teenager, but the first time I realized filmmaking was my gifting and life-long pursuit was when I was 22 years old.

I am drawn to movies that are layered with compelling action and symbols, which work best in movies, as opposed to in novels or plays. I gravitate to lean stories driven by strong moments of character actions that reveal subtext, pithy dialogue, and potent cinematic images that bypass the mind to strike the heart.

Here’s my long list of favourite screenwriters (in no particular order):

Peter Jackson: THE LORD OF THE RINGS TRLOGY and THE HOBBIT

William Goldman: THE PRINCESS BRIDE, MISERY, BUTHC CASSIDY AND THE

SUNDANCE KID, ALL THE PRESIDENTS MEN

Ernest Lehman: THE SOUND OF MUSIC, NORTH BY NORTHWEST

Joseph L. Mankiewicz: ALL ABOUT EVE

Oliver Stone: JFK, NIXON, BORN ON THE FOURTH OF JULY

Robert Benton: PLACES IN THE HEART

Horton Foote: A TRIP TO BOUNTIFUL

Lana and Lilly Wachowski: THE MATRIX

Jordan Peele: GET OUT

Throughout the past decade there are six TV series that come to mind that have arrested my attention for various reasons:

I’ll share a few, because I never have just one favourite cinematic moment. There’s a surreal moment in Steven Spielberg’s EMPIRE OF THE SUN when a person dies and we think their ascending soul lights up the sky, but the reality is something deeper, less personal and much more universal, rooted in the best and worst of humanity at war across the earth. I’m intrigued and inspired by such crafted scenes that speak with various depths into the human heart, leaving us speechless and unnerved.

Another striking moment is revealed in CHINATOWN during Jack Nicholson’s “my sister, my daughter” slap with Faye Dunaway. The audience is confused, angered, horrified and left gobsmacked by the end of this scene.

Lastly, I’m amazed by the gentle imagery of heaven on earth economically infused into the movie THE SHADOWLANDS. By the final frame, we are left breathless with witnessing the shadowlands of earth: pain and suffering leading to joy, dramatized and layered deep by the accompanying narration.

George Bailey in IT’S A WONDERFUL LIFE: he sacrifices his career for others and when he’s at his lowest point — all is redeemed. Forrest Gump in FORREST GUMP: he’s a sort of Christ figure, allowing us a means to see the world from a more pure and non-jaded viewpoint. Celie in THE COLOR PURPLE: she braves her way through a harsh life and lands in the end with redemption all around her. Sir William Wallace from BRAVEHEART: he loses everything, then sacrifices everything courageously to fight for freedom and liberty for his people unto death.

There’s a story from long ago about two weary travellers who were walking along a road between two Middle-Eastern cities. They came upon a mysterious man who joined them and asked why they were sad. They explained that they were mourning the death of their friend who had recently been executed by government officials and political/religious enemies. The man walked with them for quite a distance, telling them deep secrets about Himself and of the universe. They were breathless and invited him into their home for dinner. In the middle of their meal — He vanished before their eyes.

That’s the person I would like to talk to. Because He knows all things.

Those from the Judea-Christian belief hold firm that the mysterious man who disappeared was the Jewish Messiah, Jesus.

I can’t think of anyone more interesting than Him to sit with over a glass of wine or cider by an open fire, just listening and asking Him anything and everything imaginable.