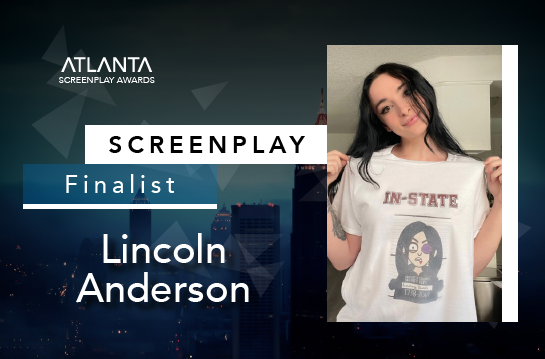 My name is Lincoln Anderson! I was born in Brockton, Massachusetts, but I currently live in Los Angeles. My family is born-and-bread Boston Irish Catholic, which is ripe for comedy. My hobbies include writing, sketch comedy, stand up comedy, and… going to bars.

I spent my whole life watching adult cartoons. As a kid, my mom worked nights, so she wasn’t around to stop me from binging Adult Swim until two in the morning. CUT TO: 20 years later, I’m a junior in college. I’ve spent the past three years partying with my insane friends. My last two surviving brain cells are dedicated to adult cartoons and being a degenerate. So: I made an adult cartoon about being a college degenerate. Four years later, I continued perfecting the script, getting to know the characters, and writing more episodes of the show until I got the draft I have now—which I am officially starting to produce this month with my head animator. (If you want updates on the show, you can follow us on instagram @instatecartoon)

The way I write is very weird. Rather than creating a proper story outline—you know, like you’re supposed to—I like to work backwards from jokes. Every time I get a funny idea for a joke, I write it down in my notes. When I sit down to start an episode of In-State, I scroll through these jokes and craft a story around them.

When I’m done, I usually go back and write a new draft that makes more sense. What I love the most about writing a sitcom is getting to know my characters better, because it’s really informed me on the type of jokes each character would say.

I’ve been writing since I learned how to read. As a little kid, I would write these scary stories and draw disturbing illustrations to go with them. In middle school, I made an adult cartoon on my school laptop that was so raunchy I almost got expelled. Then, in high school, I discovered that I really love writing scripts. I wrote this stupid feature-length mafia movie that I thought would win me an Oscar at the age of 15 (it didn’t). When I got to college, I started writing comedy and performing stand up around New York City—and that brought me to where I am today!

My biggest influences are Seth MacFarlane, Tina Fey, Elizabeth Merriweather, and Tim Robinson. I love that all of these people have such a strong idea of who their characters are. I also appreciate how they’re not afraid to write dialogue that is truly absurd, because that’s my favorite style of comedy. J.G. Quintel is another big inspiration for me. I like how strong his character designs are, and how he worked his way up from short animatics to becoming a famous show runner who can appeal to both children and adults.

I’ve been obsessed with Family Guy for as long as I can remember. Just picture 5- year-old me reciting the “Grinds My Gears” bits word-for-word; not even knowing what they mean. I think the quotability of these silly jokes, plus how much I related to the show as a New Englander, contributed to my lifelong obsession.

Recently, I was really excited to see Zach Hadle and Michael Cusack get their show “Smiling Friends” developed by Adult Swim. Seeing two talented creators go from YouTube content to major network success is really inspiring, and something I hope to accomplish one day.

Roger from American Dad. He’s perfect in every way. A character who is constantly changing, but somehow remains the same, is brilliant to me. He’s also a bisexual icon and I wish I could be him.

I would love to talk to my biggest inspiration Seth MacFarlane. As a kid, Family Guy molded my brain and my humor; turning me into the ridiculous person I am today. If I could talk to him, I would ask what the key is to creating memorable cartoon characters and capturing their unique voices. I would also love to meet

Tina Fey and pick her brain about working as a woman in the comedy world!