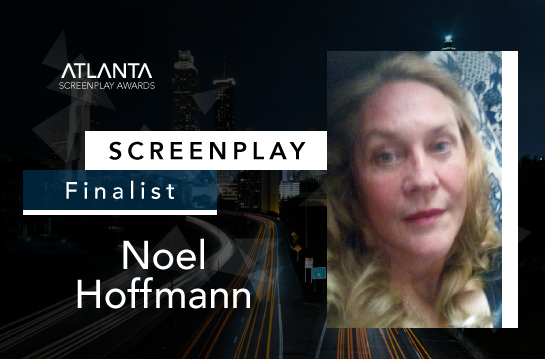 Where were you born?  U.S. Army Base – Okinawa, Japan

Where do you live?  Spartanburg, South Carolina

And what’s your hobby?  Writing!

Where did you come up with the concept that just placed as Finalist in the screenplay contest?   This was initiated from a book I wrote.  I knew every single one of these characters. I grew up with them.

About a year – off and on.  I first had to learn how to write in screenplay format!

From concept to finished draft, can you take us through your screenwriting process? The book was much longer, so it needed to be cut and condensed in many places to fit the maximum 125 pages acceptable to most screenplay contests.  It was hard because there were so many fun parts that needed to be cut, but you know what they say? Cut your darlings!

When I realized that screenwriting was so much cleaner (and harder) than pages upon pages of description. That to visualize and be able to quickly capture it in a few short sentences is so much more satisfying.

Who are your biggest filmmaking/screenwriting influences?  John Carpenter, Alfred Hitchcock. Spike Lee…so many!

What about their style do you like or borrow?   They love to shock people. Make them sit back in their seats and hold on. Think about…what if.

Have you ever been obsessed with a movie or TV show?  If so, which one? Why?

Cold Mountain. Because, I think it thoroughly captured not only what was happening then…but now.

What’s your favorite moment in cinema history? Why?  Again, Cold Mountain. When Inman says, “I believe God is tired of being called down on both sides of an argument.”

Who’s your favorite character in cinema history? Why? Sorry! They’re all my favorites!

If you could talk to anyone from any era, who would it be and what would you ask them?  A pre-Egyptian. Who really built the Sphinx, what did it originally look like and when was it built?