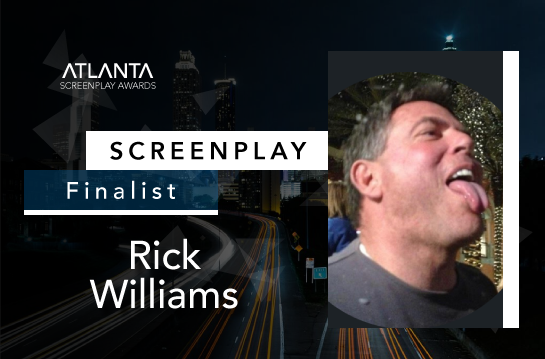 Rick Williams (aka Johnnie Lunchpail), born in Burbank California. My father was one of the original Disney Imagineers and helped design many of the popular attractions including The Haunted Mansion. In fact, his tombstone sits in front of the attraction. (Gordon Williams)

My wife and I are currently enjoying living in paradise (aka South Florida—hurricanes and all!). We live on a small farm with goats, chickens, and a citrus orchard in various stages of death.

I love history, especially history dealing with interesting and amazing people. Two of those amazing historic figures are Bud Abbott and Lou Costello who made a world laugh during a time of war. Additionally, I realized that there is an entire generation (or two) that have no idea who these comedy icons were. It was clear that their story had to be told. I was surprised that there has never been a feature about them.

I worked on “Who’s on First” off and on for a year, re-writing it completely at least three times. It fell in place once I understood what made them great was their love for each other.

For “Who’s on First,” I read every bit of information I could find on the duo. I watched their movies and T.V. series until I fell in love with Bud and Lou, and knew how they spoke, how they stood, and how they would react. Then I just started writing, letting the “movie” unfold as I wrote. Then I spent the next few months re-writing it… getting feedback and re-writing, and re- writing. I use a different process for each project.

I started composing music when I was 3 or 4 and started writing scripts when I was about 9 or 10. I completed my first musical when I was 14, and continued improving my art. I have had two produced musicals, one in NYC and one in London.

When Covid hit and theaters were closing, I decided to channel my creative energies to story-telling without having to write and arrange 20 songs! Screenwriting was a natural transition.

This is a tough one. I have admired the creativity and quirkiness of Bryan Fuller. I love the clever dialogue and characters especially with his short-live “Pushing Daisies.”

I’d have to say for T.V.: “Pushing Daisies.” When the series ended, I cried. It is so original, well written and clever, I love to binge, and it is so good, I still cry. For movies, it’s a tie between “The Princess Bride,” and “Abbott and Costello Meet Frankenstein,” both are so much fun and have so much heart, not to mention iconic characters.

The scene from “Amadeus” where Mozart plays back the piece written by Salieri perfectly with only hearing it once… then immediately starts improving it and creating variations.

Oooh, another hard one. There are many characters, but I think one of my favorites is the iconic Gomez Addams from the old sitcom of long ago. Many don’t realize that before John Astin’s Gomez, the Charles Addams characters had no names or histories. Mister Astin’s Gomez must be one of the most endearing and enduring characters of all time. He was creepy and kookie but passionately loved his wife, and his family!

There are so many folks throughout history that I would love to hang out with, but if I had to pick one, I’d have to say Jesus. I’d ask him to teach me to love more deeply, especially those who I may not consider lovable.