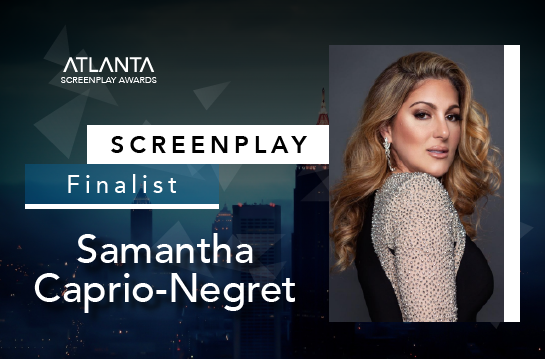 My name is Samantha Caprio-Negret. I was born in Philadelphia, PA. I currently live in Davie, FL. My hobbies are reading, writing, watching TV/Film, doing make-up, and just being creative in so many ways!

It’s based on a true story about my Italian immigrant great-grandparents, and all the adversity and challenges they faced – how murder, revenge, family, love, and the Black Hand Society heavily influenced their lives, and changed it for future generations as well. The story started and was told by my father, Philip Caprio.

The concept started in 2009. My father started with verbally telling my writing partner and I the story from start to finish. We took many notes. Then we had a book called, “Murders in Monmouth: Capital Crimes from the Jersey Shore’s Past (CH.6: Revenge of the Farinella Brothers)” which helped us with the actual historical facts from the real story, being this is based on a true story. We then wrote the movie treatment first, breaking it down into three acts (6 pages). From there, we just began writing. It reached 161 pages initially, which took years. Then we trimmed it down to 140. After many years of revisions + professional feedback, we finally got it down to a 129 beautifully written pages.

I started writing when I was a child. I loved storytelling, and I was obsessed with books and 80’s cinema growing up. But I never really realized then that I wanted to be a screenwriter. I didn’t even know what that was. After I graduated with a BS from Florida International University Journalism/Broadcast school in 2003 and having the experience writing for entertainment television from WSVN 7 DECO DRIVE in Miami, FL, I realized I loved script writing. But initially, I was afraid to write feature films. So, after some creative story ideas in mind, I wrote them as children’s books. But my love for screenwriting ventured back into play when the idea for MANO NERA, originally titled, BLACK HAND, came into my life divinely, which is another story for another time.

Oh, wow! That’s hard to say, and a very loaded answer. I wouldn’t be able to choose just one, so I’ll have to list some of my biggest influences: Nora Ephron (best for her romantic comedies and dialogue for both the male and female voice), Steven Spielberg (king of fantasy and adventure; not only is he a fantastic director, but a brilliant writer), John Patrick Shanley (for writing my favorite movie of all-time, MOONSTRUCK); Quentin Tarantino (again, brilliant director, but even better writer). No one is better at writing humor mixed with gore combined! Nia Vardalos for writing MY BIG FAT GREEK WEDDING. She just nailed writing from her own personal experiences growing up with a Greek family. Her characters and comedic timing in the movie were just genius… lines that last a lifetime! We also share the same birthday, September 24th. I would have to throw William Goldman in there for writing PRINCESS BRIDE… I mean, say no more. Classic movie, and one of my fav’s. Save the best for last, Francis Ford Coppola and Mario Puzo for THE GODFATHER. I’ll just leave that (these guys) right here. I am not worthy (as I take a bow)!!!

Of, course! That’s a funny question to ask a screenwriter. We’re obsessed with stories – movies – constantly! 50% of my dialogue used in a day comes from a movie. I’m sure I annoy the crap out of my family and friends with it. It’s endless! I can say that every movie I named above and/or the screenwriters’ movies, I’ve probably watched each of those a hundred times.

If I must name top 5 movies:

A moment? Wow, I never thought about that before. But I guess I’d have to go back to my favorite movie – Moonstruck – in the last act in the kitchen with the whole Castorini family. I grew up in an Italian household who are from Trenton, NJ, and I can say that that moment in the kitchen – Loretta Castorini with her family – the characters pegged it! It was so well-done that it felt real, not even acting. That’s exactly how it was in an Italian NE kitchen in the 80’s. The chemistry among the actors was uncanny, the dialogue on-point, and the moment that everyone addresses all the family dysfunction at the same time in the same scene (the elephants on the table) were perfection! Rose addresses Cosmo’s infidelities, Loretta admits to being in love with Ronny Cammareri, Johnny’s brother, (even though she’s supposed to be marrying Johnny). The old man addresses his son, Cosmo, and how he needs to pay for the wedding of his only daughter, because he didn’t want to. Then the Cappomaggi’s enter the scene addressing how they never received the deposit at the bank, which was the bookkeeping responsibility of Loretta. And finally, Ronny confronts Johnny that he’s in love with his fiancé, Loretta, and how he wants permission to borrow back the ring to propose marriage, taking away his brother’s original proposal. There’s so much chaos and crazy family dysfunction in that scene, yet it all ties in and makes perfect sense. That’s amazing writing! The characters continue to move on, still pour champagne and toast to, “a la familia!” I would have to say that’s my favorite scene/moment in cinema history if I had to choose one. Because my friends, that is family.

Cher went on to win an Academy Award for her portrayal of Loretta Castorini in MOONSTRUCK.

Loretta Castorini is one from all the reasons I’ve mentioned above.

Nicolas Cage as Jack Campbell in” The Family Man” is another. His character is the perfect combination of serious and funny, confident yet afraid, shallow, and full of heart and substance. I don’t know how he pulls it off so perfectly, but Nicolas Cage is the king when he plays in romantic comedies. His character is a portrayal of all the good and bad qualities we have within ourselves, I believe.

Marlon Brando/Frank Sinatra/Judy Garland – I’d ask them the obvious, what it was like for them, making their art. Of course, for Marlon Brando it would be playing “The Godfather,” and for Judy Garland it would be every detail of making, WIZARD OF OZ, which is another one of my favorite movies.

And Frank Sinatra – just what it felt like being him on a professional and personal level. The difference between singing and acting, in his opinion. And what he thinks is necessary to obtain his level of success and talent. What it’s like being a legend, an icon? If I was a fly on a wall, I’d follow his life. Maybe even Marilyn Monroe too.