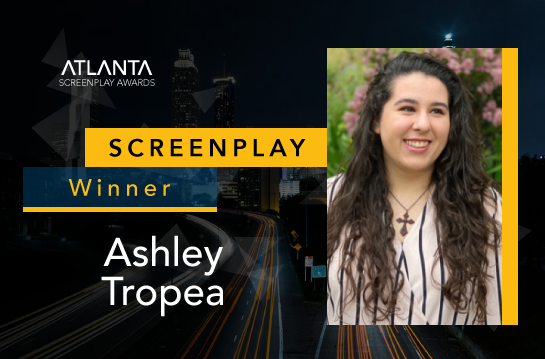 My name is Ashley Tropea. I was born in Los Angeles, California, where I still live today. When I’m not writing, I’m either reading any fantasy novels I can get my hands on, playing piano (albeit not extremely well), or playing video games (my favorite is God of War).

I came up with the concept for COUNTERFEIT while at my parents’ house, when I discovered a huge family secret nearly a year after the event actually took place (which my family would kill me for mentioning here). I became really fascinated by the idea that my family went to such lengths to make sure I didn’t know about this simply so I wouldn’t tell anyone else, all because external perception mattered more than any actual transgression. Which is how I developed the idea of a family whose literal survival is dependent on their ability to keep scandals hidden. It took me about a year to fully develop this pilot episode.

When I first thought of the concept for this pilot, I became really obsessive about needing to get it down on the pages. I didn’t really plan much. I just knew that it would begin with a man’s suicide and end with the women paying for it. I sat down and wrote the entire pilot in the span of two days, and then I went back and did the proper “prep” work. I created character biographies to fully get to know these outlandish characters and their antagonists, and then utilized my brilliant professors and classmates at Loyola Marymount University to tighten my script. I wrote the rough draft the summer before my senior year at LMU and then honed the script throughout the year.

I’ve always been obsessed with reading, so I knew from the age of 11 that I wanted to be a writer and finished my first novel by the age of 14. When I got to high school, I knew I wanted to work in film, but I wasn’t sure in what capacity. It wasn’t until I was 16 that my obsession with television began and I realized that I wanted to do that.

I very much admire Shonda Rhimes and her ability to make every show feel incredibly character driven. Almost every show she’s worked on throws you right into action, which is very much how I like to write. Forget the prologue and the preface, just throw the audience in the deep end and let them figure it out. And I also like to think I pull from the iconic gothic writers, like Mary Shelley, Oscar Wilde, Bram Stoker, and the Bronte sisters. Almost everything I write has an eerie feeling to it, which I fully blame on my obsession with these amazing authors.

I’ve been obsessed with a lot of TV shows throughout the years. My first ever obsession was probably Buffy the Vampire Slayer, definitely due to the gothic monsters and the teenage romance and angst. But as I grew up, my obsessions shifted to Penny Dreadful, Game of Thrones, Downton Abbey, and The Witcher. Anything with those gothic undertones, historical warmth, or expansive worlds, and always with a healthy dose of romance. I view film, TV, and books as an escape, and nothing speaks more to that than period pieces and fantasy.

As a big fan of period pieces, romance, and musicals, my favorite moment is from The Sound of Music. No, it’s not any of the songs themselves, or even any of the incredibly fun scenes in between. My favorite scene is when Captain Von Trapp calls Maria “Captain.” I was raised on this movie, and I’ve always thought that line was one of the most brilliant ways of subtly showing a shift in their relationship dynamics. With just one word, the audience fully understands just how much the captain’s attitude toward Maria has changed. And that one word was enough to make my eight-year-old-self swoon.

There are so many, but if I have to pick one that I’ve loved for many, many years, it would have to be Jane Porter from Disney’s Tarzan. Like most young kids, I grew up on Disney and Tarzan was always my favorite, purely based on Jane. She’s hilarious, adventurous, brave, awkward, and intelligent. At that point in time, I hadn’t come across many female characters who weren’t perfect. But Jane felt like such a real person who screws up a lot when she’s first introduced to the world of apes. She’s constantly embarrassed but trying to play it cool. She emanates warmth and compassion. She’s a brilliant scientist while also making everyone laugh.

My initial response to this answer is Jane Austen, just so I could pick her brain about all things writing. But my history nerd brain would love to go back in time and meet the unknown woman Viking found in a grave in Birka. For years, archaeologists assumed the skeleton was a male war leader, based on the type of burial the person received, but DNA recently found it to be a woman, which shook the foundation of what we’ve understood to be women’s roles in the Medieval Era. I’d love to meet that woman simply known as Bj581 and find out what being a female warrior and leader was like in the Viking era.