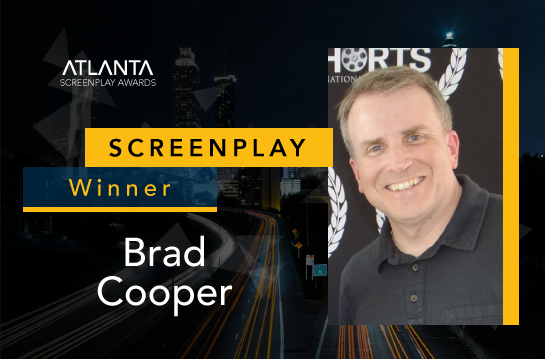 My name is Brad Cooper. I was born and raised in a small town in Upstate New York, and I live with my family in Orange County, California. Too many hobbies to mention, but these days, most of my spare time is spent with my family and includes a lot of fishing with my sons.

For a long time, I wanted to write a modern adaptation of Joseph from the Bible’s Book of Genesis with Joseph as a computer scientist and with Silicon Valley replacing ancient Egypt as the setting. I spent many years working in tech and have been closely watching the ethical issues as we get closer to something like artificial general intelligence. Many sci-fi films skip past how a sentient AI might realistically be developed at a startup company. So, with my screenplay, The Last Creation, I was inspired to tell the familiar AI come-to-life story, but from the viewpoint of an insider, while also exploring some of the moral and ethical dilemmas. My oldest son was interested in film, so just before the pandemic, I was like Rodney Dangerfield in the movie Back to School and took college film classes with him. The initial script came out of one of the screenwriting classes that I took with my son. At the time, it was only the second proper screenplay I’d ever written. The initial drafts came quickly since I’d already been thinking about the story for a while, and I’ve been revising it off and on over the past two years.

I tend to let ideas roll around in my mind for a long time before I even open the screenwriting software. If the idea passes muster and it’s something I’m passionate about, I’ll work out the core story, the hooks, the ending, and some of the characters. While I develop most of the initial story in my head, I also take notes on all those key aspects. Then I create an outline and fill in as many details as I can, including some important lines of dialogue. Once I have the outline, I start at page one and plow through writing the script. Once the first draft is complete, I do a lot of revisions before showing it to anyone. At that point, I submit to coverage services and festivals that provide feedback. When I see consistent feedback, I’m ruthless about making the script better, even if it means rewriting large sections, removing characters, changing the settings, and even big changes to the plot. Table reads with actors or even shooting a few scenes has been an important part of the process for me and I’d encourage all screenwriters to do this. While it takes some of us out of our comfort zones, it’s been a big help in refining dialogue and getting the pacing right. Early on, I won some awards in screenwriting contests. So that encouraged me to know that I was on the track. However, even though a script wins awards, it takes a lot of fine-tuning before I feel like something is finished. I’ve only recently gotten to that point with The Last Creation, at least in the short film format.

I’ve been writing stories for films in my head for a long time, probably since high school. However, outside of writing pages of notes and outlines, up until a few years ago, I’d never really written what I would call a proper script until those college screenwriting classes. In one of the classes, I got to write and produce my own short films. One of the films I wrote, directed, and starred in was just supposed to be a generic “two-character scene.” I decided to write a prequel to one of my teammate’s prior short films. Our cast and crew kept that a secret, so nobody in the class, including the professor, was expecting my film to be a prequel to another film the class had seen before. As they watched it, slowly the audience started to pick up on the clues, and, by the end with a big reveal of the bad guy from that other film, everyone was hooting, hollering, and cheering. Much to my shock, the class gave us a standing ovation. I’ve never felt anything quite like that. That feeling encouraged me to keep going and it showed me that screenwriting may be something I have a knack for and might be called to do.

At the top of my list would be Christopher Nolan. Nearly every film he’s written seems written just for me. There are so many twists and turns, and my brain hurts trying to figure it all out. He makes movies that leave you thinking for days or weeks after you’ve seen them. Next would be Andrew Stanton. Every film he writes is a masterclass in emotional storytelling. Finally, my list of influences wouldn’t be complete without George Lucas. People give him a hard time for his dialogue, but he is a legend and is responsible for Star Wars and Indiana Jones – two of my favorite franchises. In my films, I’d love to have the twists and thought-provoking stories of Nolan, the emotional feels of Stanton, and the adventure, special effects, and comic relief of Lucas. That would be an incredible mix, but not easy to achieve in a single film.

I am not sure that anything has reached the obsession level. However, I have always been a science and tech nerd, so I tend to latch on to good stories that are sci-fi, that bend the rules, that present moral conflicts, and anything that makes me think for days. Growing up, the Star Wars and Indiana Jones films had the biggest impact on me. Later, films like The Matrix and Christopher Nolan’s projects. And now, my son is also into Star Wars, so it’s come back full circle, though it has been hit or miss with the more recent films and shows. In Star Wars, I saw a lot of myself in Luke–growing up in a small farm town in a place that seemed to be the “farthest from the bright center of the universe.” Those films took us all on adventures to see things we’d never seen with special effects that were groundbreaking.

Since just about any of the endings of all my favorite films could potentially qualify for this, it’s difficult to pick a favorite. In sticking with the Star Wars theme, it would have to be the binary sunset scene in Episode IV, A New Hope. As I’d mentioned, as a kid watching that film for the first time, I saw a lot of myself in Luke. Even though he’d lived on Tatooine his whole life, he always had a sense that he was out of place. He knew he was meant to be somewhere else and do something else. It was the reverse of the usual fish out of water story where the fish starts in the water and later gets taken out of the water into unfamiliar territory. Luke was the fish out of the water his whole life, but he still longed to be in the water, even though he never experienced it. That scene was the defining moment of Luke’s character and set the stage for the entire franchise. Just a few short scenes later, his life and the course of the galaxy would be changed forever.

Again, far too difficult to choose just one. I relate most to the characters who are the underdogs, the unlikely heroes, whom all seem stuck in a place in which they just know they don’t belong. An inciting incident rocks their world and they realize they may be meant for something more. They go on an impossible hero’s journey to find out who they are and where they belong: Rocky Balboa, Luke Skywalker, Neo, and Marty McFly, to name a few of my favorites. Rocky and Marty have a sense of humor, which I also prefer in characters, even if it’s just to break up the action. If there is one downside with Luke and Neo, it is that they are both just too darn serious all the time.

As a person of faith, the obvious choice would be to talk with Jesus. I would have far too many questions for him! But the science nerd in me would want to talk to Einstein. While many scientists of his time thought he wasted his later years by pursuing unification theories of physics, I believe he was onto something and would love to ask him about his ideas and bring him up to speed on the latest advancements and theories. I have a hunch he was onto something and just needed more time and more data to help him tackle some of the biggest outstanding questions in theoretical physics.

Thanks so much for the award and for the opportunity to share a bit of my journey as a new screenwriter!